Opium derivatives can be very dangerous and it is important to understand why and how these issues can affect you. The main derivatives of opium are morphine, codeine, and heroin. These drugs directly originate from opium itself as opposed to other substances which derive from different opiate-based drugs or are synthetic opioids.

The direct opium derivatives are three of the most dangerous opioid-based drugs that a person can abuse. While morphine and codeine are both used to treat pain (and codeine is sometimes used as a cough treatment), heroin is not a medically used drug and, even though it is addictive and extremely dangerous, “heroin is the most commonly used opioid” (ISATE).

Morphine users must understand the many warnings and possible risks that come with taking morphine for pain. According to the NLM, “Morphine may cause serious or life-threatening breathing problems, especially at the beginning of your treatment and any time your dose is increased.” Also someone who abuses morphine is even more in danger of experiencing these life-threatening breathing issues, as well as addiction, tolerance, dependence, drug-seeking behavior, and abuse that can lead to the eventual use of heroin. 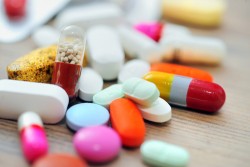 Many prescription painkillers are actually derivatives of opium.

Morphine is extremely potent and “the solution with the highest concentration (100 mg/5 mL) should only be taken by people who are tolerant (used to the effects of the medication) to opioid medications.” If someone who is not used to these effects takes morphine in a high concentration or high doses, life-threatening respiratory depression and other issues may occur.

The drug is a schedule II narcotic which is the most potential for abuse a drug can have without being schedule I and, therefore, unable to be used at all in the medical community. As a derivative of opium and a substance that is found naturally occurring in the poppy plant, morphine is a natural opiate which creates other issues including:

As a drug that is often abused by young adults and adolescents, codeine is very dangerous. According to the NIDA, “Drinking prescription-strength cough syrup containing codeine and promethazine mixed with soda was referenced frequently in some popular music beginning in the late 90s and has now become increasingly popular among youth in several areas of the country.”

This combination can make individuals who drink it feel very close to being drunk, and sometimes, even alcohol is added to the mix. This is extremely dangerous because codeine, like all other opioid drugs, can cause respiratory depression that can result in coma and death. This potential is always greater if the individual is drinking alcohol as well.

Another issue that has commonly been caused by codeine, according to the NLM, is “some children who took codeine to relieve pain after surgery to remove their tonsils and/or adenoids have had slowed breathing and have died during their treatment.” The NLM advises parents that, if a doctor prescribes codeine to their child after tonsil surgery, they should request a different type of medication if at all possible.

Codeine has many of the same issues that morphine does, and while the medication is beneficial to many individuals, it is also a natural derivative of opium and should be treated with caution and not with nonchalance (as natural substances sometimes are).

Heroin is one of the most dangerous and one of the most commonly abused drugs available today. Many people who start out abusing prescription opioids move to heroin after their tolerances become too high for them to feel the effects anymore. This is extremely dangerous as heroin has the potential to cause many problems and dangers for abusers, some of them deadly.

The NLM states, “Major health problems from heroin include miscarriages, heart infections, and death from overdose.” Heroin abuse also has the potential to cause the transmitting of dangerous diseases like hepatitis and HIV because of the use of shared needles or the risky sexual behavior that is often exhibited by heroin abusers.

According to the NIDA Teen, “In 2011, 4,397 people died in the United States from a heroin overdose, an increase of almost 2.5 times compared to the 1,784 people who died from a heroin overdose in 2001.” And this is only one of the ways a person can experience deadly effects from the use of heroin.

Heroin is a semi-synthetic opioid which means that, while it was derived from opium, it also has aspects that are manmade. This makes it no less dangerous because the addictive potential for heroin is extremely high and individuals who abuse it will feel the effects extremely quickly whether they inject the drug or smoke it.

The Dangers of Opium Derivatives

Drugs that are directly derived from opium are very dangerous because they come right from the pure source that causes the way opioids affect the mind and body. These drugs are all incredibly dangerous because of this fact. However, heroin is a semi-synthetic opioid, but it is just as dangerous or more so than codeine and morphine.

The abuse of any type of opioid drug has the potential of causing life-threatening respiratory problems, addiction, tolerance, dependence, and behavioral and physical effects that can be extremely dangerous. There are other drugs as well which derive from morphine, technically a step down from direct opium derivatives, that can cause all the same issues that opium derivatives can.

As an opioid user, you should understand the safest ways possible to take these drugs, which is to stick to your prescription and discuss ways to safely come off the drug when necessary with your doctor. Opium derivatives are dangerous but so are all types of opioid-based drugs.