Opium is a substance that is derived from the poppy plant and used in a variety of prescription drug combinations as well as individual to produce euphoric effects including relaxation, pain relief and reduction of anxiety. Unfortunately, opium is a dangerous substance that can lead to serious consequences if overdose occurs. Opium overdose thought not highly common when the drug is smoked, can produce a deadly reaction if proper treatment is not immediately sought.

One of the earliest signs of opium overdose is hallucinations.  Auditory or visual hallucinations may result causing the individual to misinterpret a situation and can lead to other serious consequences such injury or even death. Hallucinations are not generally a side effects of using opium unless a toxic amount of the drug is abused. 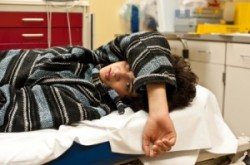 Recognizing the signs and getting help ASAP are essential for getting through an overdose.

Upset stomach and vomiting are both possible reactions to smoking opium. People who use this drug often experience side effects such as nausea or vomiting while they are under the influence or as a result of withdrawal after they have become addicted. However, when vomiting is accompanied by labored breathing, confusion, hallucinations or dizziness this could be a sign of opium overdose.

Opium use can cause adverse effects to the thinking and thought processes of the user but usually doesn’t lead to extreme states of confusion unless the user has overdosed on the drug. Severe confusion is one of the early warning signs of opium overdose that should be recognized and accepted as a means to seek immediate professional help for the individual before the symptoms of the overdose reach a dangerous state in which death or serious injury may occur.

Overdosing on opium can cause the individual to have trouble breathing which may actually lead to heart attack or stroke for the user. Labored breathing, raspy breathing, or depressed breathing are all signs of opium overdose that warrant the need to seek immediate medical attention for the safety of the individual. Failure to seek immediate medical attention when an individual has potentially overdosed on opium may lead to serious injury, long term side effects or even death.

According to the DEA, “overdose effects include: coma and possible death.” The effects of overdosing on this drug are quite similar to those produced by other opiates or opioids such as morphine or fentanyl. In those who experience coma as a result of overdosing on opium, immediate medical treatment is necessary to prevent further brain damage or potential death.