No addict ever hopes that when they start taking drugs or using alcohol that they will become addicted and despite the horror stories or the experiences they witness, they almost always believe it can never happen to them. They may feel they have too much to lose to let it go that far or that they, somehow, have more wisdom, morals, and willpower than others, but, if there is anything that can throw a person more off track, it’s the anguish that comes with addiction when they are unable to control their lives.

Addiction is a progressive and chronic disease that alters brain functioning and many physiological systems with the substances becoming as important to the addict as food, water, sleep, and sex is to others. Helping an addict can be a difficult and drawn out struggle, but, according to the National Council on Alcoholism and Drug Dependence (NCADD), you can’t expect the person to stop without help and “Treatment, support, and new coping skills are needed to overcome addiction to alcohol and drugs.”

The Plight of an Addict 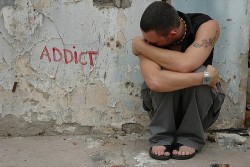 Learn about the difficulties of addiction.

Alone, destitute, desperate, and unmotivated for change despite the consequences is where a great deal of addicts find themselves with little hope in their future as they struggle with frequent intoxications and withdrawals. According to the SAMHSA, ” For both men and women, substance abuse can lead to social isolation and loneliness, reduced self‐esteem, family conflict, sensory losses, cognitive impairment, reduced coping skills, decreased economic status, and the necessity to move out of one’s home and into a more supervised setting.”

Getting drunk or high becomes the ultimate relief when their mind and body is taken over by cravings and impending withdrawals or those disturbing issues that seem to be even more difficult to contend with when they try to remain abstinent. Whether it is self-medication or self-fulfillment, the repeat abuse of substances changes the way a person thinks, feels, and behaves. Addicts who are unable to decipher what’s really best for them or how others can help end up manipulating every person and instance they can to maintain their dependency conditions.

People who are not addicted often take the approach of why bother to help someone who doesn’t want to help themselves. Many have witnessed the unsuccessful attempts to sustain abstinence in individuals which they tend to chalk up to failure, but, it’s that lack of motivation for change that often leaves people wondering whether or not they can really help an addict. According to the SAMHSA, “Motivation has been described as a prerequisite for treatment, without which the clinician can do little” and goes on to say that; “Similarly, lack of motivation has been used to explain the failure of individuals to begin, continue, comply with, and succeed in treatment.”

While these views of addiction as a morality or self-control problem are radically changing thanks to research and science, when addiction is viewed as a disease and mental health illness that is treatable, addicts still face an uphill battle that leaves many willing to accept their plight as unchangeable. When it comes to drugs and alcohol, inevitably, it doesn’t matter who you are or what you believe, once a person becomes addicted, without help, “all bets are off”.

How You Can Help an Addict

If an addict’s environment is discouraging with lack of social support, ongoing abuse around them, or other dysfunctions in their life, chances are they will be unable to get past the detox phase; let alone, maintain any significant time in abstinence without help to make the right changes. Many addicts who are ambivalent to seek treatment do so for fear of the withdrawals and what comes after, knowing that relapse rates remain high when it comes to certain types of drugs.

Nagging, quarreling, trying to make them recognize their problem, or enabling them through avoidance, cover ups, or supporting their basic needs so they can keep using are some of the worst things you can do. If anything, the addict will twist and turn these efforts against you in their own efforts to maintain their addiction.

What you can do to help an addict are to:

Motivating changes takes a strong stance of committing to your own wellbeing and holding the addict accountable for the consequences of their addiction while letting them know that you will support them if they choose to go to treatment. Treatment will, ultimately, be the most influential in motivating changes. According to the SAMHSA, the clinician’s task is to enhance and elicit motivation by: