Opium is a substance that is derived by collecting and later drying the milky juice that comes from the seed pods of the poppy plant.  The substance can vary in color and may be yellow or could range all the way to a very dark brown color.  Opium has a very bitter taste and a distinct odor that is easily recognizable (if you know the odor you’re smelling). 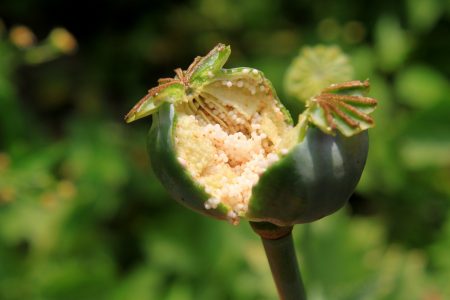 Opium is naturally derived from the opium poppy plant.

The primary component of opium is 12% morphine which is an alkaloid that is often processed chemically to produce illegal drugs such as heroin.  Codeine and other non-narcotic alkaloids are also found in the latex that is derived from the opium poppy plant.

Traditionally, opium was obtained from the latex of the poppy plant by scoring the seed pods by hand and allowing the latex to leak out and dry up.  The sticky yellowish/brown residue is then scraped off and harvested for use.  Today, modern methods of opium harvest include processing the mature poppy plant by machine in order to get the latex out of the flowering plant.

Overall, opium production has changed very little over the years however selective breeding of the plant has led to an increase in the content of the phenanthrene alkaloids morphine, codeine and thebaine.  Illegal use of opium that is converted into the high potency drug known as heroin is taken intravenously through injection, snorted or smoked.