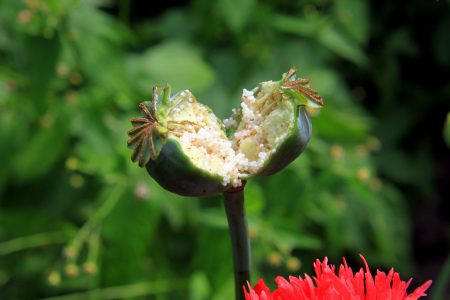 Some opium derivatives come directly from the opium poppy plant, such as morphine and heroin.

Generally, opium derivatives can be broken down into two common groups- those which are directly from the plant such as morphine, codeine and heroin and those which are semi-synthetic such as Oxycodone, Hydrocodone and Hydromorphine which is also known as Dilaudid on the streets.  Many drugs are synthesized from the raw versions of opiates.  For instance, Vicodin and Demerol are actually derived from Morphine which comes raw from the opium poppy.

Semi-synthetic drugs are opium derivatives which include the use of a raw form of opium such as morphine paired with a synthetic or non-natural drug.  Some of the most common semi-synthetic drugs are also the most widely used on the streets today and have the highest potential for abuse, physical and psychological dependence and addiction.

There are also drugs which are not derived from opium and do not have any opium or opium derivatives in them but they act like or produce a similar effect to those drugs which are actual opium derivatives.  These drugs are called synthetic drugs and they are fully synthesized in a lab and created to mimic the results of opium.  Synthetic opiates include: