Much like the pain-killing substances found in opiate drugs, the body produces its own brand of opiate-like chemicals. This natural similarity between opiates and the body’s own pain-killing chemicals can produce detrimental effects when opiates are taken on a frequent basis. One of these effects takes the form of opiate tolerance. 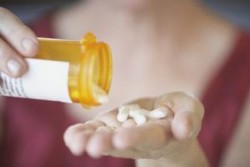 Your body becomes accustomed to taking opiates, and eventually will build up tolerance.

Opiates are usually prescribed to treat conditions involving pain. These drugs work by slowing down the signaling process between nerve cells. As opiates interact with various cells in the brain and spinal cord, the body releases endorphins or natural pain-killing chemicals. Over time, the body comes to depend on the presence of opiates to function normally.

According to the Natural Institute on Drug Abuse, this process eventually changes the way brain and nervous system cells operate. As the cells become more dependent on opiate effects, they secrete less and less endorphin chemicals on their own. As a result, the body starts to crave larger doses of opiates to make up for its inability to secrete endorphins on its own. When this happens, a person’s opiate tolerance level has increased.

With ongoing drug use, tolerance levels continue to rise as the body becomes more and more dependent on opiate effects. The chemical processes involved with tolerance and dependency eventually lead to addiction when left untreated. In effect, opiate tolerance becomes the driving force behind a growing addiction.

On a cellular level, opiate tolerance develops as nerve cells become less sensitive to the effects of the drug. This process is known as down-regulation. When ingested, opiates bind to nerve cell receptor sites and trigger endorphin secretions. Over time, cells “down-regulate” the number of receptors on each cell meaning fewer receptors are available to bind to opiate materials. This process is the body’s way of self-regulating in response to opiate’s effects on endorphin secretions. Increased opiate tolerance levels result from these “down-regulating” processes.

Likewise, when someone reduces dosage amounts or stops taking opiates, cells switch over to an up-regulation process to compensate for the absence of opiates in the system. As both up- and down-regulation take place over time, the withdrawal symptoms a person experiences from less opiates in the system results from cells trying to regain their normal functional capacity.

In effect, other drugs or certain medical conditions increase the half-life of opiates in the system. Half-life has to do with the rate at which a drug is metabolized and/or eliminated from the body. Any drug or medical condition that slows down the opiate metabolism rates can potentially speed up opiate tolerance effects.