Opium addiction often leads to a very relaxed state in which the user will be sleeping, dreary or otherwise mellow. Unfortunately, the relaxation that comes as a result of using opium is often followed by behavioral patterns of irritability and agitation. According to Web MD, “stopping the drug causes withdrawal symptoms,” that may include irritability, agitation and insomnia. 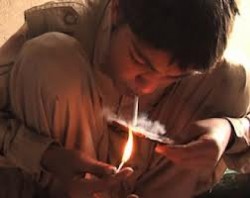 Someone who is addicted to opium will likely obsessively seek out and smoke opium.

According to Indiana University, “the person becomes obsessed (constantly thinks of) the object, activity, or substance,” when addicted. People who are addicted to opium will talk about the drug regularly, spend excessive amounts of time using the drug and will become complete preoccupied with using the drug no matter what it is interrupting or regardless of the problems it may be causing.

People who are addicted to opium are often compulsively engaged in the use of the drug. They will smoke opium or use the drug no matter what—regardless of the location, timing or other principles that may make it a bad decision to be under the influence such as while driving or while using other drugs. Opium addiction takes over a user’s life making it both difficult and downright unlikely that they will stop without help.

Most of the time, people who abuse drugs will deny that they do so. When opium addiction is to blame, the user will deny that he or she is an addict or, if willing to admit that there’s a problem, they are usually unwilling to admit that the drug is causing as many problems as it truly is. Denial of the negative effects of opium, denial of the problems that the drug use is causing financially or in relationships or denial of the addiction all together are all common behavioral symptoms of opium addiction.

Addiction will cause the individual to lose control over his or her drug use. Instead of being able to smoke opium just for fun or only on certain occasions, those who are addicted will often resort to using the drug everyday or they will not be able to control the amount of the drug that they use. Tolerance, as defined by the Merriam-Webster Dictionary as, “your body’s ability to become adjusted to something (such as a drug) so that its effects are experienced less strongly,” builds quickly with opium use and is the leading cause for this lack of control once addiction sets in.