According to the Centers for Disease Control, opiate addiction and overdose are reaching epidemic proportions. Most people do not realize how easy it is to get addicted to an opiate or opiate mix drug. You start taking opiates without ever realizing how addictive they are or how quickly you can become addicted to them. In order to see why the addiction can sneak up on you, there are a few things that you have to understand first.

Dependency and addiction have some similar elements. These elements are:

Although startlingly similar to each other in definition there is one large difference between dependency and addiction. The difference is if you are dependent on the drug you take it as prescribed and it does not harm your life. It actually helps you function normally. 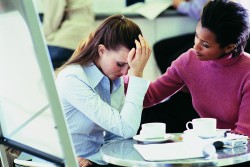 If you are addicted to a drug, you take more than the recommended doses and you cannot function normally, the drug starts to harm your life. The cross over between being dependent and addictive is a very fine line. Many people start by being legitimately dependent on a drug and move rapidly into addiction.

It is Only a Little Bit

Addiction sneaks up on many people because they start by only taking a little bit more of the drug. They justify this by only taking small a tiny bit more than prescribed to alleviate the pain they are experiencing instead of speaking to their doctor about it. Most times doctors will prescribe a nonaddictive painkiller in order to keep their patients out of pain and not addicted.

Instead, they take a half a pill more which rapidly turns into another whole pill or two. Before they know it, they are taking the opiate constantly and are addicted to it.

It is only a Painkiller

A common belief is that it is not addictive because doctors use it to treat pain. It is most of a legitimately prescribed medication. You might think that it is harmless because it is prescription but the truth is there are many medications that are extremely addictive but still in use as medication.

Ease of Addiction to Opiates

Most people who use opiates do not get addicted right away. It takes a while for the negative pathways in the brain to form. It can take a few uses or a few hundred uses, but opiates are almost always addictive once you reach a certain point of use.

Since people are basically pleasure seeking and opiates cause extremely pleasurable feelings, most people who overuse them become addicted to them without even noticing. Some people describe it as suddenly waking up with a need for the drug or with the withdrawal symptoms themselves.

If you find yourself addicted to opiates no matter how slight the addiction you should look into treatment or at least consider the possibility of an alternative medication. For more information on treatment and alternatives to opiates, call us at 800-405-7172.