In a word, yes. Opium is a highly addictive narcotic drug. The short term effects of opium, while not as damaging as those associated with long-term use, can be very harmful to the user, leading to addiction, coma and possibly death.

The drug is extracted from the seed pods of the opium poppy plant. Opium can take the form of a liquid or solid, but is most commonly available on the street in the form of a fine brown powder. It is the primary source for many other powerful drugs, such as codeine, heroin, oxycodone and morphine.

Opium has been used for hundreds of years, dating back to Alexander the Great and before. It was first used as a pain reliever and surgical analgesic. In the 19th century, it became extremely popular as a recreational drug in Britain, widely used by creative types such as writers and poets. Over time, its popularity as a recreational drug took hold in the United States. Its origins are from locations such as Turkey and Afghanistan. 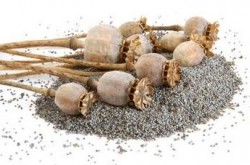 There many street names for opium. Just a sampling of some of the most commonly used ones are Aunti Emma, Big O, Black Hash, Chinese Molasses, Dover’s Powder, Dream Stick, God’s Medicine, Gondola, O, Toxy and Zero.

How Opium is Used

People often inject opium, but it also can be smoked or taken as a pill. The short-term effects of the drug vary from person to person, but often mimic those produced when using alcohol, antihistamines or anti-anxiety medicines such as Xanax. Opium also can cause constipation on a short term basis, which is often followed by a bout of diarrhea. Dehydration and severe dry mouth are other short-term effects caused by opium, and can continue for hours after the drug has worn off. Impaired cognitive abilities, such as trouble concentrating, impaired speech or being highly confused also are short term effects of taking the drug.

The drug creates a euphoric relaxed feeling, and eases physical pain. It is this euphoric feeling that can often quickly create a person’s dependence on the drug, leading to addiction. Even on a short-term basis, if taken in a large enough dose, opium can slow one’s heart rate and breathing. This reaction can lead to other complications, such as passing out, falling into a coma or even death.

Some signs to look out for if a loved one is suspected of getting too involved with opium are:

Changes in behavior – a person can tend to become quick to anger, which can escalate into being hostile and even violent with friends and family, especially when the user does not have access to the drug. He or she may be constantly edgy until obtaining it once again.

Sloppy appearance – Users can get so that they are concentrating only on obtaining and using opium. They worry less about their hygiene and physical appearance. They may start skipping showers or wearing the same clothes day after day, in addition to losing interest in one’s physical appearance.

Losing one’s job or being kicked out of school – Negative behavioral changes also can take place outside of the home, leading to someone being fired from a job where he or she previously thrived, or a student being suspended or even expelled from school for unacceptable social behavior. A person may even resort to stealing, in order to afford the drug.

Paraphernalia – An obvious sign that someone is using opium is the presence of the paraphernalia needed to use the drug, such as pipes or burned spoons. A user will hide such paraphernalia from family or friends, but may become careless and leave it in a place where it can be discovered.

All of these actions, especially the discovery of paraphernalia, are blatant signs that someone is involved with opium use, and perhaps on the road to addiction and the dangerous consequences that come from extended use. These signals indicate that there is no time to wait to rescue an individual from getting in too deep.

While the short-term effects of using opium are often reversible, long-term effect of using the drug can lead to more serious health concerns, the first of which is addiction. Being addicted to opium can take its toll on a person’s social, mental and spiritual well-being. Getting un-addicted can be even worse.

These symptoms can remain strong for 3-5 days before lessening.

Other long-term effects include the possibility of lung cancer for those who smoke the drug. Smoking opium can also cause serious damage to the heart liver and kidneys.

Injecting opium can cause damage to the veins and increase the possibility of transmitting an STD from using another person’s needle that may be contaminated. Skin ulcers can also appear, which, in a worst case scenario, can lead to amputation of a limb.

So while the short-term effects of using opium are largely reversible if caught in time, they are still dangerous, and it is not advisable to get involved with the drug at all. Once a person develops a dependence on the drug and gets addicted, the short-term effects disappear as larger, much more serious problems develop. For help finding treatment for addiction call 800-584-3274 toll free.