There are many long-term effects of opium that should be thought about before ever using the drug. One of the primary long-term effects of opium use is tolerance which can lead to physical dependence and subsequent addiction. Tolerance is the term used to describe the situation that occurs when an individual uses a drug and ultimately has to use more and more of the drug in order to produce the same effects.  Over time, continued opium use will lead to a tolerance build up that results in the need to use large amounts of the drug in order to produce the same pleasurable effect as when the drug was first taken.

Many of the long-term effects of opium use are related to the drug being smoked.  Smoking anything is damaging to the lungs but smoking opium can be more damaging than things like tobacco or marijuana.  Many people who do smoke opium also smoke it with marijuana or tobacco which leads to even more damaging side effects to the lungs.  Smoking opium can also lead to heart damage and other consequences that result from a lack of oxygen in the regulatory system. 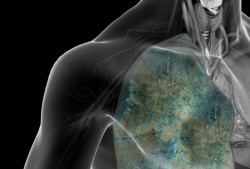 Lung damage is one of the long term effects of opium.

Eating and smoking opium can lead to liver and kidney damage.  Long-term use of the drug may cause renal failure.  Additionally, if the drug is injected or if derivatives of the drug are injected there could be severe damage to the veins and contamination could occur.  This can lead to abscesses of the skin and disease from the use of dirty needles.

According to the DEA, prolonged use of opium may lead to a state of withdrawal that occurs if the drugs is not used.  Withdrawal symptoms are one of the many long-term effects of using opium.  Because of these symptoms, an individual who uses opium for a long time may have difficulty quitting.  The withdrawal symptoms that come from the use of opium include nausea, sweating, anxiety, chills and insomnia.  Other symptoms may also present such as aches and pains in the muscles and bones, diarrhea, and high blood pressure.

Opium use should be taken very seriously to prevent these long-term effects from occurring.  It’s important to refrain from the use of opium derivatives as well because these too can cause many long term effects.  There are many analgesic drugs and painkillers that are derivatives of opium or the poppy plant as well as synthesized versions that all have similar long-term effects and should be avoided whenever possible.