It doesn’t matter what the substance is you’re abusing, all addiction occurs in the brain. But addiction’s more than just a craving or a need. It’s the result of chemical changes and imbalance, and quitting isn’t always as simple as just stopping use.

When it comes to the brain, every neurochemical has a role to play, and Dopamine’s no different. This neurotransmitter is important in motivation, attentiveness, learning, and memory. Dopamine contributes to making both norepinephrine and epinephrine, and it’s also vital to natural reward identification, and plays a significant role in all addictions. Regardless if it’s opiates, alcohol, crack, cocaine, or sex, addiction increases the level of dopamine in certain areas of the brain, leading to feelings of euphoria and, ultimately, addiction. If you’re addicted to opiates, call 800-405-7172 for help.

Opiates, such as opium, morphine, and heroin mimic the body’s natural pain killers, binding to the brain’s opiod receptors. While this reduces pain levels, opiates are depressants, and therefore slow down the body’s processes. This slowing down lowers the oxygen levels in both the body and brain and can lead to the potential of coma and death. 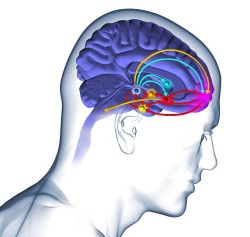 Opiate abuse increases the amount of dopamine released to the Ventral Tegmental Area of the brain.

The Ventral Tegmental Area (VTA) is the center of the body’s limbic system, also known as the reward pathway. The VTA is the area of the brain focused on pleasure and pleasurable rewards. All addictive substances and activities work on this system, and increase the levels of dopamine present, although each does so in a different way.

In the VTA, opiates bind to neurons that typically release the chemical GABA. GABA’s role in the VTA is to monitor the levels of dopamine and stop too much from being produced. But because opiates are depressants, they slow down GABA production, and less is released into the brain. Because there’s less GABA, dopamine levels increase significantly, and the result is the euphoric high associated with these narcotics.

After a regular, extended period of opiate abuse, the brain changes in other ways, some of which are more difficult to reverse and may cause life-long impacts. The brain’s white matter is reduced, causing difficulty with decision making and memory recall. Because opiates are so much stronger than the body’s natural pain reducers, the brain tries to adapt to the surplus of dopamine, reducing the amount of dopamine receptors. This makes a user have to take more opiates to get the same effect, and becomes a downward spiral. With less dopamine receptors, when the drug isn’t present, there is a significant drop in dopamine levels. This reduction makes daily functioning more difficult and makes the individual less receptive to normal pleasure and joys. Overtime, the brain can actually rewire itself, strengthening addiction and making it even harder for some individuals to find recovery.

Are You an Opiate Addict?

If you or someone you love is suffering from addiction to opiates, there is hope. While opiate addiction is not easy to beat, it is possible. Call 800-405-7172 today to talk to someone about getting the help you need.