The harmful effects that opium has on the body will depend largely on the method of opium use, the length of time that the drug is used and the individual person. If opium is refined to Morphine or Heroin and then it is injected, the dangers and harmful effects on the body can be dramatically increased. However, even smoking opium can have lasting effects on the body as the chemical pass into the lungs and are absorbed into the blood vessels to be sent to the brain.

When opium is smoked, the chemicals enter the lungs and are then dispersed through the blood and make their way into all other organs of the body. The eyes become pinpoints and breathing slows down. The user will experience a rush of pleasure that is immediately followed by a relaxed state. For those who were previously in pain, physical pain is eliminated with the opium use. 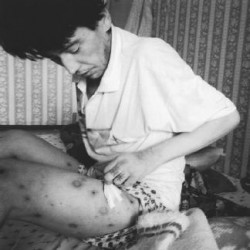 The effects of opium on the body can be permanent.

Opium also affects the body by causing tolerance and physical dependence. The human body will respond to a lack of opium with various withdrawal symptoms. These symptoms may include nausea, vomiting, diarrhea, upset stomach, anxiety or insomnia. The withdrawal symptoms occur because when opium is used, the brain stops making pleasure-enhancing compounds and the body adjusts to the opium presence. When the opium effects wear off, the body no longer feels pleasurable and it responds with these withdrawal symptoms.

The changes that the body goes through as a result of opium use are similar to those that a heroin addict will go through. Opium and heroin have many of the same characteristics and they cause many of the same effects on the body. The withdrawal symptoms are similar and in many cases, opium is the term used to describe other opiates such as prescription painkillers, heroin or Morphine. The unpleasant symptoms that result during opium withdrawal can last for about 5 days and longer in more severe cases.

The effects that opium has on the body can last many months or even years. The damage that is done to the lungs and other organs can result in disease such as cancer or other conditions that do not go away. It is not uncommon for the harmful effects of opium to persist well into a person’s life long after he or she has stopped using the drug. Damaging chemicals from the drug can cause lasting consequences for the user.

If you or someone you know is abusing opium regularly, you should seek immediate help. Opium can have a major impact on your health and well-being. Long after you decide to quit using opium, you are likely to suffer the consequences of having used the drug.