Black tar opium is a type of heroin that is different in appearance to other forms of the drug. While other forms of heroin are typically a white or tan powder, black tar appears to be “rock like.”

Despite the difference in appearance, black tar can either be smoked or melted down as a means of administering through an intravenous injection.

Using black tar opium, just the same as any type of heroin, is extremely dangerous and can lead to a variety of health effects, including death.

Side Effects of Black Tar Opium Use

Regardless of how the drug is taken, the user will experience side effects that include an immediate rush of euphoria. It is this feeling that attracts many people to black tar opium.

Other side effects, those that are more serious in terms of a person’s health, include the following:

Note: since no two people are the same, the health effects of black tar opium are never identical. One person may experience most of the side effects detailed above, while another does not.

Just the same as all opiates, there is a high risk of addiction associated with black tar opium. Dependence can develop quickly, leading to the potential for a serious addiction or overdose.

Black tar opium is associated with spontaneous abortion. In other words, anybody who takes this drug during the first 20 weeks of pregnancy is taking a big risk, as the chance of an abortion is much higher. 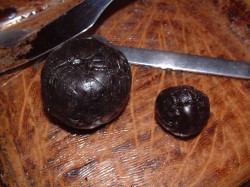 Withdrawal from lack tar heroin can cause depression.

Once a person becomes addicted to black tar opium, stopping use can lead to a variety of withdrawal symptoms. In addition to intense cravings, other symptoms can set in. These include the following:

It does not take long for a person to become addicted to black tar opium. Once this happens, it is difficult to quit without professional help.

There are many reasons to seek professional treatment, including the ability to receive medication, such as clonidine, to help ease the discomfort and pain associated with the detoxification process.

Even though black tar opium may not be identical in appearance to more common forms of the drug, the health effects are every bit as serious. In the most severe cases, the use of the drug can result in death by overdose.

According to the National Drug Intelligence Center, understanding the potential health effects of black tar opium may help you or a loved one get the professional assistance you need.