Heroin is one of the most highly addictive drugs ever produced from the morphine alkaloids of opium. Although eradication efforts of opium and heroin have been in effect for many years, the trafficking of black tar heroin from Mexico and Latin America continues to grow.

It is an easier form of heroin to produce that eliminates some of the synthetic processes normally used in heroin productions. The result is a solid sticky black substance that looks and feels like tar, but, users are not to be deceived, this substance can have more powerful effects than other forms of heroin and addiction can occur rapidly.

As black tar heroin enters the brain, it activates opioid receptors that release dopamine, the neurotransmitter that signals the sense of pleasure and relaxation. Depending on how the black tar heroin is ingested, how potent it is, how much is used, and the tolerance of the person using it, the dopamine floods the brain and causes euphoria.

This “rush” sends a sense of warmth and numbness throughout the individual’s body as it flows through the bloodstream, followed by the depression of central nervous system (CNS) functions including; reduction of pain and other stimuli, depressed heart rate, blood pressure, breathing, and the sedative effects known as “nodding off”.

According to the National Institute on Drug Abuse, “In 2011, 4.2 million Americans aged 12 or older (or 1.6 percent) had used heroin at least once in their lives. It is estimated that about 23 percent of individuals who use heroin become dependent on it.” The dependency results in physical and psychological symptoms of cravings and withdrawals when the opioid content in the person’s system drops to certain levels.

Because black tar heroin is a sticky “tar-like” substance, in its most common form it may be smoked or heated, dissolved, and injected. These are the preferred methods of ingestion by addicts because they are the fastest routes of opioid chemicals into the brain.

Other methods of using black tar heroin include: 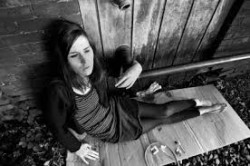 The signs of black tar heroin addiction can be recognized as the progression of use continues and physical signs may include:

The most common psychological signs of black tar heroin addiction include: