Opium, the mother of all pain relief medications, has a long history as a treatment drug. Opium comes from the opium poppy plant. As a substance, opium itself belongs to the narcotics class of drugs, commonly known for their highly potent and addictive effects, according to Palomar College.

Opium’s strong pain-relieving effects naturally carry over to its opium derivatives. Opium also produces a sedative effect that likewise contributes to its strength and addiction potential.

As a plant-derived substance, opium and opium’s derivatives naturally activate the body’s own opiate receptor cell sites. According to the National Institute on Drug Abuse, these cell sites reside in the brain, gastrointestinal tract, spinal cord as well as in other organs throughout the body. 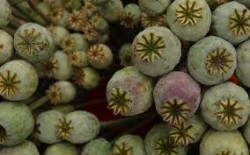 Part of the opium poppy plant is the main ingredient in some medications.

Once activated, these cell sites secrete abnormally high levels of endorphins, which act as the body’s own pain-relieving chemicals. Over time, the effects of opium and opium derivatives weaken the body’s ability to regulate pain on its own. At this point, physical dependency and addiction start to develop.

Morphine, commonly used to treat cancer-related pain symptoms, can also work as a short-term pain reliever. Compared to other opium derivatives, morphine exists as a nature-made derivative that comes directly from the opium poppy plant.

Codeine exists as a natural component of opium, typically found in concentrations of .1 to 2 percent. With such a low concentration level, most codeine-based drugs are synthetically made from morphine materials.

Like morphine, heroin exists as a nature-made opium derivative that comes from the Asian poppy plant. Out of all the opium-based drugs, heroin use carries the highest addiction rates.

Thebaine most resembles morphine and codeine in chemical structure. Thebaine differs in that it produces stimulatory effects as opposed to the depressant effects commonly produced by opiate-type drugs.

Oripavine exists as a metabolite of thebaine. As a metabolite, oripavine is used to manufacture several of the synthetic opium-based drugs, some of which include etorphine and buprenorphine.

As a semisynthetic opium derivative, natural opium-derived thebaine extracts are used in the making of oxycodone. With semisynthetic drugs, the actual potency of any one particular drug can be adjusted to different potency levels.

Codeine extracts make up the natural ingredients in hydrocodone drugs. When combined with acetaminophen, dydrocodone is commonly used as an antitussive or cough suppressant. Though semisynthetic, this group of drugs still produces narcotic effects.

Unlike the other opium derivatives, buprenorphine’s effects make for an effective opiate addiction treatment medication as well as a pain-relief drug. Buprenorphine produces long-acting analgesic effects with a considerably lower risk for addiction.

Hydromorphone, a morphine-based opium derivative, exists as an active ingredient in several brand name drugs, some of which include Dilaudid and Palladone. In general, most any morphine-derived drug carries an extremely high addiction potential.