Taking too much of any prescription drug has its negative effects, but the dangers of Vicodin, especially the prolonged use of Vicodin, carry some exceptional dangers that can lead to deadly diseases, or even death itself.

Hydrocodone is an opioid, often called a narcotic. Acetaminophen, also known by the brand name Tylenol, increases the effects of hydrocodone. Together they produce relief from moderate to severe pain symptoms by providing a relaxing, euphoric–type feeling.

However, there are many other feelings and side effects that can indicate something is very wrong. Following are the top five dangers of taking Vicodin, which you should be aware if you are taking the drug. 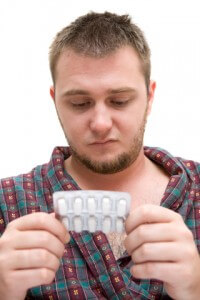 Vicodin is a serious drug. If you are prescribed Vicodin it’s important that you know the risks.

1) Take note if you seem to be developing a physical tolerance to Vicodin, meaning that you feel the need to take more of the drug to experience the same effect of your original dose. Vicodin is considered to be a highly addictive drug. Taking more than the prescribed dose can lead to abuse and eventually can cause addiction, as well as increase long-term mental and physical effects. When stopping the drug, withdrawal symptoms can be severe, including anxiety, depression, irritability and difficulty concentrating or sleeping. Other withdrawal symptoms include nausea and vomiting, diarrhea, night sweats, tremors and joint or muscle pain. Too much hydrocodone also can slow your breathing to the point of causing life-threatening respiratory conditions.

2) Another danger that breeds from the need to take more and more of the drug is that the increased amount of acetaminophen that is being ingested. An excessive amount of acetominophen can lead to liver disease. The symptoms of liver complications can include skin and eyes that appear yellow, abdominal pain and swelling, a dark urine color, swollen legs or ankles, itchy skin, chronic fatigue or a tendency to bruise easily. Contact your doctor immediately if you observe any of these symptoms in yourself. Taking too much acetaminophen can lead to acute liver failure, requiring a liver transplant or even resulting in death.

3) Drug interactions with Vicodin also can cause serious reactions, especially with those taking MAO inhibitors or tricyclic antidepressants. You should discuss with your doctor the other medications that you are taking before starting a regimen of Vicodin. In addition to MAO inhibitors, Vicodin can cause serious side effects if taken with sleeping pills, other narcotic pain medicines, muscle relaxants, benzodiazepines or tranquilizers, or medication for seizures or depression. Side effects can include mental or mood changes, including hallucinations, difficulty urinating or abdominal pain. If you have slow or shallow breathing or unusual difficulty waking up, make sure you see a doctor immediately.

4) Long term effects of Vicodin on the body affects a person’s brain in its pleasure center. The intended feelings of pain relief and mild euphoria that Vicodin can induce also can cause damage to a person’s ability to feel pleasure, leading to feelings of depression and anxiety, paranoia, psychosis, and mood swings. You may develop a sense of irritability or anxiety, or in a severe case, may experience delusions or hallucinations.

5) In the long term, body chemistry, weight, and any pre-existing physical conditions can also make a significant difference in an individual’s response to Vicodin. If you have pre-existing depression or anxiety symptoms, the long term effects of Vicodin on the brain can exacerbate those symptoms. Vicodin also is more apt to cause liver failure or death in a person who already has liver damage or liver disease.

The more Vicodin a person takes and the more often they take it will directly influence the severity of long term effects that they experience. As a result, in the fall of 2014, the Drug Enforcement Administration increased the restrictions on Vicodin to a Schedule II drug from a Schedule III drug, indicating that it is more highly addictive than previously thought and requires more supervision when being prescribed and dispensed.

If you have a disorder for which your doctor thinks the benefits of Vicodin outweigh the risks, make sure you keep a strict watch on yourself, and report to your doctor any symptoms that may seem out of whack or are causing you any type of discomfort. What may seem a mild inconvenience at first often can be a precursor to a very serious physical condition down the line, and can be avoided with a simple visit to a doctor’s office, where a serious symptom can be treated before you think is a symptom at all.