There are many similarities between opium and heroin. Opium is an opiate that is derived from the poppy plant and commonly smoked to produce euphoric effects. Much like heroin, this drug produces relaxation and is a central nervous system depressant that can cause labored breathing, respiratory failure and even death if consumed in excess.  Because both heroin and opium are both opiates, there are many similarities between the two drugs in the way that they affect the user, the side effects that occur from their use and the dangers associated with excessive use.

Both heroin and opium cause an array of effects including:

The user may notice that when he or she smokes opium a deep sense of relaxation overcome him or her. Heroin will cause a similar sense of relaxation if it is smoked or injected. Generally, the effects of both heroin and opium last about the same amount of time—a few hours at most.

Side Effects of Heroin & Opium 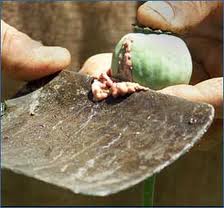 Heroin and opium are derived from the same plant – the poppy.

Heroin and opium are both opiates that affect the brain’s natural reward system in that they will cause the user to feel a lack of reward unless he or she is using the drug. What this means is that when a user becomes addicted to either heroin or to opium, the risk of feeling discontent or other serious side effects is substantially increased.

According to the National Institute on Drug Abuse, regular use of heroin will alter the functioning of the brain—similar effects are also likely with regular use of opium.  Much like other drugs, both opium and heroin also have a high likelihood of causing addiction which includes withdrawal symptoms when the user attempts to quit using the drug. Withdrawal symptoms are difficult to cope with and they tend to be the primary reason for a user to continue taking a drug such as heroin or opium for a prolonged period of time.

Dangers of Both Drugs

The greatest danger of using heroin or opium is death by overdose, but other grave dangers may also occur as a result of one’s decision to use either of these drugs. Both drugs can cause serious side effects and lasting complications for the user. Heroin use, especially when the drug is injected, may lead to disease or infection. If heroin is smoked, lung damage is likely. Likewise, opium use can lead to lung damage and other health problems.

Sustained use of heroin or opium is often accountable for addiction. People who become addicted to either of these drugs will have trouble quitting even when they decide that it’s the best thing for them to do. Quitting becomes challenging because the user experiences withdrawal symptoms such as nausea, vomiting and diarrhea that render the individual all but comfortable.

Overdose from heroin is more likely than from opium but both of these drugs can result in serious overdose which may ultimately lead to fatal complications if left untreated. Opiates, whether heroin, prescription drugs or opium, are always dangerous and should never be abused as the result could prove to be deadly.