Ultimately, opiate vs. opioid has more to do with the effects these substances have on body than any actual differences between the two.

Opiates or opiate drugs originate from naturally-occurring alkaloids found in the opium poppy plant. These drugs are best known for their ability to relieve pain symptoms. This property originates from the plant alkaloids. Opiate drug types include heroin, opium, morphine and codeine. 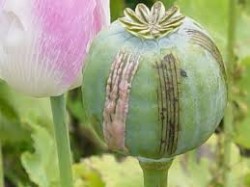 Both opiates and opioids are in some way derived from opium.

While similar to opiates, opioids are actually synthetic drugs that produce opiate-like effects, according to a Yale University report. So when comparing opiate vs. opioid, both substances produce pain-killing effects. Examples of opioid drugs include:

Opioid chemicals are also produced by specialized cells within the body’s central nervous and digestive systems. Also known as endorphins, these chemicals transmit signals between nerve cells throughout the body. Each of these nerve cells houses a set of opioid receptor sites that become activated whenever an opiate-like substance binds onto one of these sites. When activated, these cells secrete the body’s natural endorphin chemicals. Opioid cell receptor sites also become activated when endorphin materials bind onto a site.

Medically speaking, the term “opioid” refers to any substance that binds to the body’s opioid receptor sites, so opiate vs. opioid becomes a non-issue in this respect. Technically speaking, not all opioid drugs are opiates, but all opiates are opioids. For example, heroin and morphine qualify as opiates and opioids, whereas Demerol and Percocet only qualify as opioids.

In general, opioids work to depress or slow central nervous system functions, which accounts for their analgesic effects. As far as opioid receptor sites are concerned, the opiate vs. opioid conundrum doesn’t exist. Both types of drugs interfere with nerve signal transmissions in pretty much the same way.

When comparing opiate vs. opioid, there are some differences in how different drugs interact with cell receptor sites. Natural opiates, such as heroin and opium activate opioid receptor sites and stimulate endorphin secretions. These drug types also have the highest abuse and addiction potential.