Opium causes a euphoric high when it is smoked or injected that is almost instantaneous. It usually only takes about 8 seconds to feel it’s powerful effects which actually increases the likelihood of addiction.

Extended opium use can cause both physical and psychological withdrawal symptoms when it is abruptly discontinued. You might be familiar with the physical side effects of opium or opiate withdrawal, but the psychological effects might not be as well known. 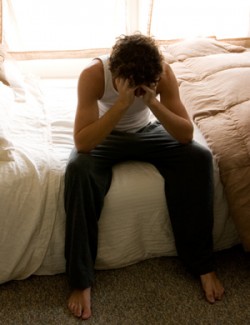 When opiates such as opium and heroin are used to get high repeatedly it can lead to a tolerance to the drugs. That means the person must use more of the drug to get high then they did initially, because they have built up a resistance to it.

When opiates are taken in large amounts and then stopped it can cause painful withdrawal symptoms, but it can also have debilitating psychological effects that include an paranoia and agitation, anxiety and depression and some even suffer from delusional behavior that includes hallucinations and psychosis that many describe as a living hell.

The length of time psychological withdrawal symptoms last varies from person to person but generally one can expect to start feeling somewhat better after about three weeks in recovery.

Many report that the worst part of the psychological aspect of opium or opiate withdrawal is that they are unable to sleep often for days at a time and that this can be what takes the longest to get back into a somewhat normal schedule.

Even months later they are still only able to sleep for a couple hours at a time and will remain awake most of the night. The mental aspect of this often drives someone with an opiate addiction to relapse, because they know using the drugs again would stop the uncomfortable side effects of withdrawal and that they could finally get some sleep.

People suffering from an addiction to opium or opiates are completely overcome with their obsession to use again and again. They say that they would do absolutely anything to use the drug again even when that means lying, stealing or worse because the desire to use again is so intense. Criminal activity has skyrocketed and more people are either ending up in jail or drug treatment due to drug addiction.

Inpatient treatment at a residential drug rehab center is thought to maximize the chance for long term recovery as it encompasses a combination of medication treatment that includes a detoxification process as well as long term follow up care and behavioral services such as counseling and community programs like Narcanon. Length of time in treatment varies but is usually recommended for at least 6 months to a year for best results. For help in seeking treatment use the SAMHSA Treatment Locator or call 1-800-662-HELP (4357).