When you think about drug use, you may focus on the 1960s and 70s, when LSD and marijuana use were advocated by many. Or perhaps you think of the rise in today’s prescription pain pill abuse and heroin addiction. But the use of opium has a history much richer than just the last few decades. And it starts in the Fertile Crescent, at the cradle of civilization.

Through fossil records, some believe the use of the poppy plant stems beyond our history. Fossilized poppy seeds may indicate that the Neanderthals utilized the benefits of the poppy over thirty thousand years ago. And while science doesn’t know exactly when opium, the tarry extract from the seedpods of the opium poppy plant, came to be, they know it was used well before the first documentation of it, and that people have been seeking its euphoria and pain killing tendencies for centuries.

The first evidence of purposeful opium cultivation is by the Sumerians around 4,000 BCE. Called the “joy plant,” its use quickly spread throughout Mesopotamia, and was enjoyed by the Assyrians and Egyptians. Even the pharaohs partook and opium smoking equipment has been found buried with them in the pyramids.

While opium was being used for recreational purposes, its medicinal uses were not overlooked. Both the ancient Greeks and Romans used it as a pain reliever and to induce sleep. Many thought it prevented poisoning and ancient physicians prescribed it for a huge range of ailments including vertigo, asthma, colic, jaundice, fever, leprosies, melancholy, and more. If you’re addicted to opiates and looking for help, call 800-405-7172 now. 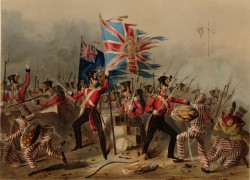 The smuggling of opium into China in the mid-1800’s is what lead to the Opium Wars.

A vast international trade route, the Silk Road ran along the Mediterranean coast from Persia to Syria, and at times extended throughout Europe and into Asia and China. Opium, which was—and primarily still is—grown in a narrow 4,500 mile section of mountains in Asia, soon become a demanded product, and was transported for hundreds of years along this famous road.

Created at the turn of the 15th century, laudanum was made by extracting opium into brandy, and created a heavy pain medication that was in liquid form. Used medicinally and recreationally, laudanum was available at both pharmacies and grocery stores until the early 20th century.

When Britain needed more money for its increasing demand of tea, it found the funds in opium. Through the East India Company, opium was smuggled into China and caused an exponential growth in opium addiction in China, and lead to the Opium Wars of the mid-1800s.

In the Wild West

When Chinese immigrants came to the American West to work on the railroads and partake in the gold rush, opium came with them, spreading with the West. As towns grew, opium dens sprung up across the country, making smoking opium a social affair.

How the Opium Trade Effects Society

In 1803, the primary active ingredient was extracted from opium and the world was introduced to morphine. Up to 10 times stronger than opium, morphine quickly spread through the medical world as a miracle drug and was by far the best medication for severe pain relief. It’s still the standard today.

Although it was first made from morphine in 1874, heroin was introduced by the Bayer Company as a pain medication alternative in 1898. Within five years, heroin abuse was evident in the US, and it was made illegal in 1924. Today, heroin use continues to grow in the United States and abroad.