There is a lot of confusion regarding what an opiate is and what an opioid is. They are two different drugs that essentially accomplish the same thing. According to the Substance Abuse and Mental Health Services Administration, the action and treatment of opiates and opioid drugs are very similar. Morphine is a very powerful opiate that is also pharmaceutically compounded into an opioid in some cases.

Opiates are not synthetic. Ancient cultures as well as modern ones harvest the opium poppy for its sap. They then distill the sap down to a sticky substance and dry it. Once it is dried, they turn it into the very powerful painkiller called morphine. Doctors use morphine to treat severe and chronic pain like the pain associated with cancers and chronic arthritis. It is one of the most powerful medical opiate forms. 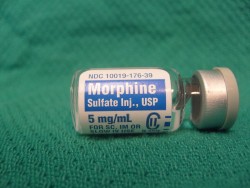 Morphine is part of a drug class called opiates.

Morphine is not the only opiate. Many others vary in strength. Two of the most common drugs derived directly from the opium poppy are codeine and thebaine.

According to the National Institute on Drug Abuse, opiates act by binding to the opioid receptors in the brain. This causes the receptors to produce large amounts of a chemical called dopamine. Dopamine is responsible for the feelings of pleasure, euphoria, and contentment. It is these feelings that make morphine and all opiates highly addictive.

Opioids are synthetic versions of the drugs derived from the opium poppy. These synthetics were once thought to be less dangerous and less addictive than opiates that came directly from the plant. This is not true. Synthetic opiates or opioids are just as addictive as their natural counterparts are. They work the same way that natural opiates do. Some of the most common opioid drugs are:

Many of these synthetics have a natural base but have so much either added or subtracted from them they no longer resemble the original natural drug.

Why the Confusion between Opiate and Opioid Drugs

The question of opiate versus opioid is a difficult one to answer because people often use the term opiate incorrectly. They generally use the word opiate to describe a wide range of opium and opium synthesized drugs. They use the term for any drug that even resembles an opium type painkiller. It became a catch all for a vast variety of different drugs.

No matter what you call it all of the opium related painkillers both legal and illegal are highly addictive. Some describe them as some of the most addictive drugs in the world. Although the withdrawal does not kill, it is extremely unpleasant. Attempting to stop on your own rarely works. Normally you need a rehab facility to help with the withdrawal symptoms.

For more information about getting the help that you need for a morphine addiction, give us a call at 1-800-584-3274. We can help.