Opiates are highly addictive and have dangerous and intensely powerful effects on a person’s body. Opiates are depressants that are both natural and manmade drugs that derive from the poppy plant. When taken, opiates will block the pain sensors in a person’s brain resulting in the individual feeling little to no pain. When the drugs are abused many people experience a euphoric rush from the drug’s effect, which results in many people taking high quantities of the drug.

Opiate abuse can lead many hospitalizations and opiate overdose results in thousands of people’s deaths each year. According to the Center for Disease Control and Prevention, in 2008 there were 14,800 deaths from prescription painkiller overdoses and from 2004 to 2011 the number of emergency room visits to hospitals from Oxycodone overdoses increased by 220%.

A person can stop breathing while taking opiates because opiates depress a person’s respiratory track and nervous system. Opiate overdose can happen suddenly and some people do not even realize that they need medical attention due to the sedation they are experiencing from the effects of the drug. If an opiate overdose occurs, it is extremely important for a person to get medical treatment immediately so that they do not become unconscious or slip into a coma. Once medical treatment is received the physicians will attempt to get the drugs out of the patient’s body. 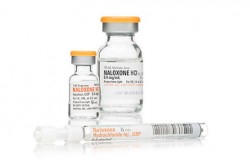 Once an individual overdoses on opiates they must receive medical treatment to keep them from slipping in to a coma or from dying. If a person finds another person going through an opiate overdose the most important thing for them to do after calling 911, is to try and keep the individual awake.

Naloxone will basically rapidly detox a person from opiates, which can save their life but will cause them to go into opiate withdrawal if they have developed a dependency to the drug. If for some reason a person cannot take Naloxone the physicians may pump the person’s stomach to get rid of the drugs and they may also opt to put them on breathing machine so that they can continue receiving efficient amounts of oxygen if their respiratory system is not functioning properly.