The U.S. National Library of Medicine reports as much as nine percent of the population abuses opiate drugs over the course of their lifetime. Opiates are commonly prescribed as sedatives and/or pain-relief remedies. Other illegal-type opiates include heroin and opium. The opiate group of drugs works directly on the body’s central nervous system by slowing down neural pathway signals.

As central nervous system depressants, opiates replace natural pain management functions, both in the brain and throughout the body. These drugs also produce euphoric or “high” effects that often drive users to take larger doses than prescribed. In the meantime, the body’s tolerance levels for the drug gradually increase, which also results in taking increasingly larger doses.

When used over long periods of time, the central nervous system becomes dependent on the effects of the drug to carry out everyday functions, such as pain management, digestion and cognitive processing. Opiate withdrawal symptoms develop when drug doses are reduced or stopped altogether. 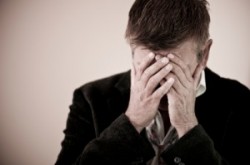 Opiate withdrawal symptoms can affect most anyone who’s taken an opiate drug over the course of a week or more. Even someone who’s prescribed opiates for pain management in the hospital will experience opiate withdrawal symptoms after being taken off the drugs. Interestingly enough, many of these people chalk it up to a case of the flu, unaware of opiate-aftereffects. Consequently not knowing opiates can relieve their flu-like symptoms, these people don’t develop cravings for opiates. On the other hand, someone who has a take-home prescription eventually starts to “connect-the-dots” and so begins the drug cravings.

Opiate withdrawal symptoms can vary from person to person, though the most commonly experienced symptoms include:

Opiate drugs specifically target a set of brain chemicals known as endorphins. Endorphins play key roles in managing pain responses, producing emotions and regulating bodily processes. With ongoing use, endorphin levels become imbalanced to the point where the brain can no longer manufacture endorphins on its own.

Opiate withdrawal symptoms result from imbalanced endorphin levels. The longer a person uses the more out of balance these levels become. Opiate withdrawal symptoms become worse in the process. Over time, a person’s cognitive functions begin to deteriorate along with the body’s overall health condition. These effects account for the growing sense of fatigue and confusion a person experiences from long-term opiate use.