Yes, Tramadol does help with opiate withdrawal, and it is one of the few withdrawal medications that is not in itself a narcotic. Tramadol is a prescription medication used to treat mild to severe pain. It is a synthetic, or man-made, drug that has similar pain relief effects as opiates, in addition to other similar symptoms, such as constipation, euphoria and respiratory depression. It is especially useful in cases of users of low-dosage use of opiates.

Tramadol is similar to opiates due to its binding to the same opioid receptors in the brain that opioid drugs like morphine and hydrocodone bind to. Tramadol, however, is not currently scheduled as a controlled substance by the U.S. Drug Enforcement Agency (DEA), which means that it has not been classified as a narcotic by the DEA and is not viewed as a drug with a high potential for abuse or addiction. Still, products such as Ultracet and Ultram, which contain tramadol hydrochloride, can be addictive.

Tramadol, when being used for opiate withdrawal symptoms, can work very well for some while offering minimal benefit for others, based on the severity of one’s addiction and individual bio-chemical make-up. Tramadol also inhibits the reuptake of serotonin and norepinephrine, which is what many anti-depressants do. This means that it also could be useful for enhancing mood-improving chemicals in the brain during opiate withdrawal. Serotonin is a neurotransmitter in the brain that makes one feel emotionally mellow and relaxed. Norepinephrine is a neurotransmitter that stimulates the brain and can increase energy and lift one’s mood. 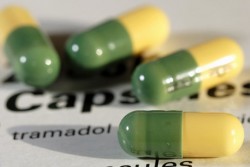 Tramadol may be able to help with opiate withdrawal, but it should be taken carefully.

There are risks involved with using Tramadol for opiate withdrawal.

There are several key considerations that can help a person determine how to use tramadol for opiate withdrawal:

Some people will benefit from taking 50-100mg of Tramadol, 3-4 times per day. Others may need much more than this, depending on the severity of the addiction. Doctors tend to prescribe Tramadol for opiate withdrawal due to its low potential for abuse. It is often more efficient than other medications and has fewer side effects. In short it is considered a low-risk pain killer.

Doctors who have tested Tramadol in comparison with other medications have found that Tramadol is more efficient in controlling opioid withdrawal symptoms such as depression, irritability, anxiety and drug cravings. Other drugs that are used for opiate withdrawal include clonidine, LAAM, levomethadyl, naloxone, naltrexone, methadone, parenteral buprenorphine, propoxyphene and sublingual buprenorphine.

Tramadol has Fewer Severe Side Effects than Other Medications

Tramadol also has fewer side effects than other medications, in addition to its having a lower dependency potential and a higher efficiency in controlling the uncomfortable symptoms of withdrawal. Side effects such as respiratory depression and toxicity, sweating and drowsiness, which come with other withdrawal medications such as methadone, are felt to a much lesser extent by people who take Tramadol. Tramadol also has less of an effect on psychomotor tasks involving speed, coordination and pattern recognition than other drugs used to treat withdrawal.