Opioid withdrawal symptoms can be extremely hard for some people to go through on their own. Many people fear coming off of opioids due to the intensity of the withdrawal symptoms. Opioid usage has significantly increased throughout the years causing more people to form an addiction to the substance and causing many people to develop a dependency to the drug. According to www.emedicine.medscape.com, opioid dependence affects nearly 5 million people in America and leads to around 17,000 deaths annually. Common opioids that people frequently abuse and become addicted to are, Oxycontin, Vicodin, Percodan and Percocet. 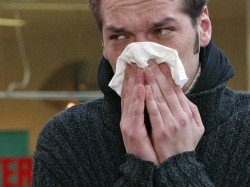 A runny nose is a sign of opioid withdrawal

Below is a list of the ten most common withdrawal symptoms for a person to have coming off of opioids:

Muscle aches: Being that opioids are intense pain killers the body will have to adjust back to its normal pain killing methods without the use of drug. A person will experience severe muscle aches while their body begins to heal.

Runny Nose: This is especially seen with people who snorted crushed up opioids. A runny nose and tearing eyes are common withdrawal symptoms that are signs that a person’s body is healing itself back to normal.

Vomiting/Loss of Appetitive: Since the body is no longer getting a substance that it is used to a person’s body may go into a type of shock and this will cause stomach cramping and possible vomiting which also leads to loss of appetite for many people.

Insomnia: Due to the intensity of the withdrawal symptoms and the body cleansing itself a person will most likely experience sleepless nights. Moreover, opioids are pain killers which relax the person’s body who is taking them, which in return can help people sleep. Now that this substance is no longer being taken, the body will have to re adjust to sleeping without the drug’s effects.

Goosebumps/Hot and Cold Sweats: Because the body will be going through a complete detox it is normal for people to have hot and cold sweats as the body conforms back to its normal functions.

Anxiety: A person coming off of an opioid may experience rapid heart rates and shakes due to anxiety. This is an emotional effect of the drug leaving the body.

Mood Swings: Due to chemical imbalances of the brain from the drug, a person may experience changes in mood quickly. This will eventually fade away once a person has completely detoxed from the drug.

Irritation: Since the body will be in a stressful state it is normal for a person to feel irritated more quickly.

Fatigue: It is common for a person to feel continually tired while coming off of an opioid.

Emotional withdrawals tend to last much longer than physical withdrawals do, but all withdrawal symptoms will eventually fade away over time. It is important for a person to get help when coming off of an opioid due to withdrawals and the support they will most likely need to overcome the addiction.