According to the Substance Abuse and Mental Health Services Administration, “Unlike alcohol and sedative withdrawal, uncomplicated opioid withdrawal is not life-threatening.” Most of the time, opium withdrawal––as well as withdrawal from other, opioid-based drugs––is not complicated and not dangerous, just very painful and uncomfortable. However, there are some complications that can be associated with opium withdrawal treatment, and both the clinician and the patient should understand them and be aware of what to look for.

Complications Due to Withdrawal Symptoms

Most of the withdrawal symptoms associated with opium dependence are not dangerous. They can be very painful, like the muscle, joint, and bone pain often experienced during this syndrome, and very uncomfortable, but they do not usually cause risk to the patient like the seizures and hallucinations sometimes caused by alcohol or sedative withdrawal. However, on some rare occasions, certain withdrawal symptoms themselves can be dangerous to the individual, and a person should be monitored for these complications by a medical staff, whether in an outpatient or inpatient capacity.

During medically assisted withdrawal treatment, patients are monitored for these possible issues by the center’s healthcare staff. If the detoxing individuals are still living at home while attending treatment, it is also important that they have a friend or family member living with them who can watch for these possible complications as well.

Complications Due to Medication 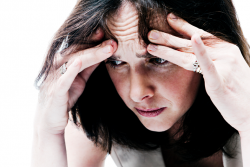 Anxiety is a common symptom of withdrawal.

In most cases patients are given medications to treat their withdrawal symptoms. This is safer as well as more compassionate because medications like buprenorphine and methadone minimize the severe withdrawal symptoms and their painful effects, making the experience much less traumatic for the individual. However, sometimes the drugs themselves can cause certain complications during treatment

It is always important that, if you are taking any medication to treat your withdrawal symptoms, you do so always under the care of a doctor and strictly to their prescription. Patients can only receive methadone through specific methadone-dispensing clinics, and while some doctors can prescribe buprenorphine through their offices, they must have a specific license in order to do so.

Relapse: The Most Severe Complication

The biggest concern for those treating opium withdrawal patients is the potential for relapse. Many reasons exist why a person may relapse back to drug abuse, especially if they were a frequent user of opium and/or other opioid-based drugs. The withdrawal symptoms can sometimes be so painful that some individuals revert back to their earlier drug abuse in order to make them stop. Mental health issues like depression and other complications can lead patients back to their earlier drug abuse as well.

In addition, those who choose to attend medically assisted withdrawal or detox but who do not follow it with the necessary addiction treatment are in severe danger of relapse. This is because “treating withdrawal is not the same as treating addiction.” According to the National Institute on Drug Abuse, merely receiving detox without a follow-up will not actually help one recover from addiction and the individual will be much more likely to relapse, as they are still addicted to opium after they leave treatment.

Relapse is the most severe possible complication of opium withdrawal treatment not because it suddenly negates the treatment itself but because it can lead to overdose and even death. According to the NLM, “Because withdrawal reduces the person’s tolerance to the drug, those who have just gone through withdrawal can overdose on a much smaller dose than they used to take.” Because opioid overdose is associated with breathing problems, slowed heart rate, coma, brain damage, and death, it is one of the most dangerous possible complications facing recovering opium addicts during and after withdrawal.

For the most part, no, it is not likely that you will encounter serious complications if you seek treatment at a professional level in a facility where you feel comfortable. However, it is important that you stick to your treatment regimen and only make a change after agreeing upon one with your doctor.

Are Your Looking for Opium Detox Treatment in Your Area?

Call us at 800-895-1695, and we will help you find the opium withdrawal treatment program that will best fit your needs.