As an opiate-based medication, Vicodin works as an effective treatment for pain-related conditions. Vicodin targets the body’s brain and central nervous system functions and slows down pain-signal communications between cells. While no doubt an effective pain-reliever, the drug’s effects come with a high risk for Vicodin abuse and addiction behaviors.

Anytime a drug can access and affect central nervous system functions, any form of misuse, in terms of taking too much or taking it for longer than prescribed, places a person at considerable risk. In effect, the dangers of Vicodin abuse all seem to have one thing in common: they come out of nowhere and happen when a person least suspects them. 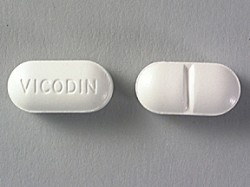 Abuse of Vicodin is bad for your health and well-being!

While many people may use the terms “dependence” and “addiction” interchangeably, they actually represent two different stages of drug abuse. When a person becomes physically dependent on a drug, he or she experiences withdrawal effects when dosage amounts are reduced or stopped. Addiction develops when a person starts to believe he or she needs the drug to function normally, according to Loyala University. This means a person can become addicted to a drug without actually being physically dependent and vice versa.

Vicodin abuse results from the drug’s ability to incapacitate normal brain chemical functions and essentially take over the body’s pain response system. This mechanism of action accounts for why a person experiences withdrawal effects when stopping or reducing dosage amounts. Restlessness, mood swings and problems sleeping result from the brain’s inability to regulate normal body functions.

Vicodin effects also interact with the brain’s reward system, which regulates a person’s learning processes. In effect, the feelings of calm and mild euphoria produced by Vicodin reinforce Vicodin abuse behaviors. Over time, the combination of withdrawal effects and learned, drug-seeking behaviors become the driving forces behind Vicodin abuse.

Brain damage, coma and death can easily result from Vicodin abuse when overdose occurs. Signs a person may be overdosing include:

For long-time Vicodin users, the physical effects from Vicodin abuse become progressively worse in terms of extent and severity. The acetaminophen ingredient in Vicodin can cause a person to develop liver disease when ingested on a long-term basis. Vicodin can also produce near fatal side effects when combined with other types of drugs, such as MAO inhibitors and tricyclic antidepressants.

Probably the most dangerous effect from Vicodin abuse has to do with how a person’s tolerance levels continually increase the longer he or she uses. As tolerance levels rise, a person will take increasingly larger doses in order to experience the same desired “high” effects. After a while, no amount of Vicodin will produce the desired effects. At this point, a vicious cycle is in motion, as the severity of withdrawal effects will continue to drive drug-using behaviors.