People suffering from conditions involving moderate to severe pain may very well receive a prescription for Vicodin. Vicodin, a commonly used pain treatment falls within the opioid category of drugs. Since Vicodin is a fairly strong opioid medication, it also qualifies as a narcotic drug. As with all narcotic-type drugs, taking the medication on a long-term basis and/or using it for recreational purposes can lead to Vicodin abuse and eventual addiction. 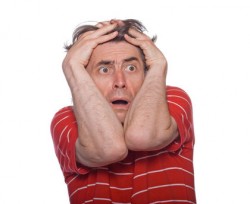 Paranoia is one sign that someone may be abusing Vicodin.

Vicodin’s active ingredients include hydrocodone and acetaminophen. While both ingredients carry pain-relieving properties, hydrocodone – a narcotic agent – is the more potent of the two. When combined, acetaminophen intensifies hydrocodone’s pain-killing effects while also acting as an anti-inflammatory agent.

When ingested, Vicodin ingredients bind onto pain receptor cells throughout the brain and body. Along with its pain-relieving effects, Vicodin also produces feelings of calm and relaxtion. These feelings become especially pronounced when a person takes large doses of Vicodin.

Physical dependency symptoms can start to develop within a week of taking Vicodin on a regular basis. Restlessness, agitation, sweating and even depression can result when a person stops taking the drug. Vicodin’s effects also tend to become less effective at relieving pain symptoms the longer a person takes it.

Considering ongoing withdrawal effects and persistent pain symptoms, Vicodin abuse can easily develop even when someone tries to follow prescription guidelines, according to Semel Institute. When used for recreational purposes, Vicodin abuse signs quickly become apparent, as increasingly larger doses are needed to produce the desired “high” effects (calm, relaxation) of the drug.

Vicodin abuse signs result from the brain’s inability to regulate chemical processes as the drug has altered normal chemical functions. One fairly noticeable of Vicodin abuse is commonly known as “nodding out.” A person will appear unusually drowsy to the point where he or she can “nod out” in the middle of a conversation or even when driving a car.

When taken in large doses, a person will experience extreme side effects, which may also be signs of Vicodin abuse. Side effect signs to watch out for include:

Vicodin abuse effects become increasingly more apparent the longer a person uses. A person’s growing obsession with Vicodin eventually turns into an overall shift in priorities. Rather than making sure all the bills are paid, having enough money available to cover Vicodin costs takes precedence.

Ensuring access to needed supplies also starts to take up a person’s time and energy. Some people may resort to “doctor shopping” in order to gather multiple prescriptions. Others may resort to stealing Vicodin or other opioid-type drugs from friends and family.

Eventually, signs of Vicodin abuse start to show up in a person’s finances, or lack thereof. Relationship problems and work-related issues, such as calling in sick and frequent tardiness also start to surface as compulsive drug-using behaviors start to take over a person’s life.