Papaver somniferum is the poppy plant from which opium is extracted. Opium is a highly addictive non-synthetic narcotic that is the key source for many drugs, including morphine, codeine, and heroin. Opium can be a liquid, solid, or powder.

Opium users have a variety of ways to get high including:

Opium seduces its users into using again because of the effects they feel when experiencing the high it creates. Those who use opium feel a euphoric happiness that is void of any pain and gives a false sense of security or a “security blanket” type feeling. Long-term users become apathetic to their worldly problems, which is also another lure of this drug, because for that period of time when they are high, they can forget anything that would normally bother them. Sadly each time they get high, more opium is needed to achieve the same level of euphoria. In the same token, Users experience definite withdrawals after each use when “reality” sets back in. The increasing desire to have that high again, coupled with the increased amount needed to achieve it each time, provides a two punch combination that guarantees a knock out in self-control over this drug.

Some of the Generic/Chemical names for naturally occurring Opiates include:

Some of the names for synthetically derived Opiodes include: 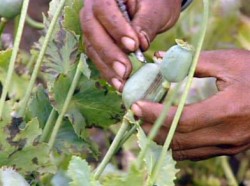 Opium is an addictive substance that comes from a type of poppy and is used for prescription medications.

According to the Drug Enforcement Agency of the United States of America, the intensity of opium’s euphoric effects on the brain depends on the dose and route of administration. When smoked, it works quickly because the opiate chemicals pass into the lungs where they are quickly absorbed and then sent to the brain. An opium “high” is very similar to a heroin “high”; users experience a euphoric rush, followed by relaxation and the relief of physical pain.

Opium use leads to physical and psychological dependence, and can lead to overdose.

Abusers may also experience adverse health effects such as a high risk of contracting hepatitis and AIDS (in IV needle users). As well as an increased pain tolerance resulting from the use of Opiates. This poses a danger to users who could severely injure themselves and fail to seek medical attention because of the lack of pain suffered. According to the Department of Interior, high physical and psychological dependence results and can compound the impaired functioning further. Narcotics’ effects are multiplied when used with alcohol and other drugs. This behavior can significantly increase the risk of an overdose.