There are many interesting things to note about opium and its derivatives. Opium is a highly-addictive narcotic drug that is used all over the world. Opiates can be consumed several different ways and are used for a variety of different purposes. Some of the more interesting facts about opium/opiates/opioids are listed below.

Opium comes from a flower

The poppy plant, Papaver somniferum, is the source of opium. It was grown in the Mediterranean region as early as 5,000 B.C., and has since been cultivated in a number of countries throughout the world. The milky fluid that seeps from its incisions in the unripe seed pod of this poppy has been scraped by hand and air-dried to produce what is known as opium. Modern methods of harvesting for pharmaceutical use include the industrial poppy straw process of extracting alkaloids from the mature dried plant (concentrate of poppy straw), according to the DEA.

Opium has several derivatives that have similar effects, some are used medically

Opiate is a term that refers to drugs and medications derived from the opium poppy plant. Examples of the substances include: heroin, morphine, codeine, and buprenorphine. Some Opiates are prescribed regularly for pain relief and management. Opioid is a more general term that include opiates as well as synthetically derived, yet similar, drugs such as methadone, meperidine (Demerol), and fentanyl. These drugs are used for their analgesic effects. They are prescribed for similarly to morphine. Opiates/Opioids have been used throughout history for the treatment of such ailments as diarrhea and eye diseases, but are most commonly used for the medical reduction of pain. 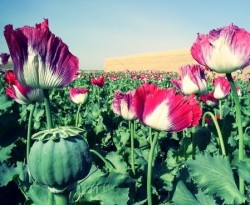 Opium is actually a flowering plant.

According to The CIA, “opium production occurs in three source regions — Southeast Asia, Southwest Asia, and Latin America; creating a worldwide problem. While an undetermined amount of the opium is consumed in the producing regions, a significant amount of the drug appears to be converted to heroin and sent to the primary consuming markets; Europe and North America.”

Of an estimated 2 million heroin users in the United States, 600,000 to 800,000 are considered hardcore addicts. While most heroin users in the U. S. tend to be older, heroin use among younger groups has risen in recent years; due to the higher purity levels of heroin allowing it to be smoked or snorted, and making it more attractive to drug users who do not wish to inject. In addition, lower prices for heroin make the drug affordable and accessible.

Heroin addiction is considered to be one of the hardest addictions to recover from. Opiates and heroin accounted for the majority percentage of drug-related admissions into treatment facilities. Success rates for recovery are higher when abusers seek treatment at a specialized care center. Ironically, most treatments for Opiate addiction involve the administration of opioids to alleviate the symptoms of withdrawal and “wean” the abuser off the drug. Pharmacological therapy is only one facet used to help in the successful recovery of an addict.