According to the National Institute on Drug Abuse, opiates, opioids, and opium abuse is a major problem in the United States. Unfortunately, the widespread use of this drug is a growing problem. It is important to know all of the forms of opium and opiates in order to avoid the pitfalls of addiction to these drugs.

Opium is the rawest form of opiate. It is carefully gathered from the opium poppy and dried into a sheet of resin that is later broken up and sold. People use opium by either smoking it or brewing it into a tea. Smoking opium was once an accepted practice until people realized the dangers of this drug. Fortunately, not many people use opium in its rawest form anymore. 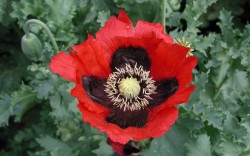 Opium is retrieved from the opium poppy flower.

Morphine is distilled down from raw opium. It is an extremely powerful painkiller that doctors use to control intense and chronic pain. Doctors prescribe morphine for chronic pain due to cancers and other deadly diseases where addiction is not an issue because death is inevitable and for intense acute pain due to an extreme injury. The DEA and other agencies strictly monitor morphine use but it is still sold illegally on the black market.

Hydrocodone is a common painkiller. It is usually mixed with acetaminophen and other similar painkillers. Doctors prescribe it for both chronic and acute pain.

Methadone is a drug that doctors use to help people who are addicted to other opiates. Unfortunately, methadone is also extremely addictive but this addiction is easier to control than standard opiate addiction. Doctors control the methadone very carefully, and as long as the addict is kept at a stable monitored dose they do not suffer the ill effects of it.

10 Medications that Are Opium Derivatives

Heroin is the illegal equivalent to morphine. It is extremely addictive and holds a variety of dangers. Its illegal nature puts people at a greater risk than the legal versions of this drug. These risks are:

All of these make heroin the riskiest of the opium derivatives. Since it is completely illegal it is not controlled at all during the manufacturing and distribution process. It is considered by the CDC and the DEA to be one of the most dangerous drugs, and certainly the most dangerous form of opiate.

Opium and opiate addiction is an extremely dangerous problem. Fortunately, there is help for those who need it. For more information on the treatment of opiate or opium addiction call us at 1-800-584-3274.