There are many types of opiate drugs, with most being used for the medical purpose of relieving moderate to severe pain.

Some people start out taking an opiate for a medical reason and then develop an addiction. Others begin to take this drug illegally, getting it from a friend or family member.

Opiate drugs are highly addictive, which is why you should only take it if being followed closely by a doctor. Your medical professional can provide you with guidance from beginning to end, helping you get the most out of the drug without becoming addicted.

Here are some of the most commonly abused opiate drugs: 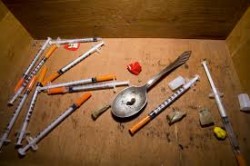 Heroin, demerol, morphine and codeine are among the most commonly abused opiates.

Heroin derives from morphine and is typically white or brown powder. According to the National Institute on Drug Abuse, more than four million Americans over the age of 12 used heroin at least once in their life (as of 2011). Additionally, the organization found that roughly 23 percent of people who use the drug develop a dependency.

If you or a loved one is abusing one or more of the drugs above, it is important to learn more about the risks as well as the many types of treatment that exist. Even in the most severe cases, it is possible to overcome an opiate addiction.