According to the Centers for Disease Control & Prevention, healthcare providers wrote an estimated 259 million prescriptions for painkillers in 2012, an ongoing trend that’s seems to be coinciding with increasing rates of heroin use. Over the course of the past two decades, there’s been a more than noticeable increase in the number of painkiller prescriptions written, with heroin use skyrocketing over the course of the last decade.

While spikes in all forms of drug use tend to ebb and flow over time, painkillers and heroin share certain similarities that make it impossible to ignore this co-occurrence of trends currently taking place. Heroin and painkiller drugs belong to the same class of drugs known as opiates. This similarity in and of itself plays a central role in the apparent relationship between these two drug types.

In essence, the overprescribing of painkillers has no doubt contributed to increases in heroin use, though other factors have also worked to speed the heroin use trend along. 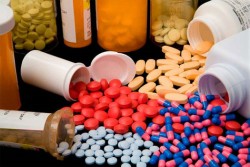 Some overprescribed prescription painkillers include Hydrocodone and Codeine.

Prescription painkillers encompass a wide range of medications of various potency levels, dosage amounts and effects. Some of the more commonly prescribed painkiller drugs include:

With the majority of opiate-based painkillers being synthetically made, opiates can treat most any type of pain symptom. Consequently, this degree of versatility has contributed to the overprescribing of painkiller drugs.

While opiates do offer an efficient means of pain relief, the brain and body quickly adapt to these effects making them less so effective the longer a person keeps using them. Painkiller drugs also produce unintended side effects, some good and some bad. Ultimately, the side effects that come with ongoing opiate account for the high abuse and addiction potential associated with this class of drugs.

Prescription painkiller abuse has become a national epidemic, affecting people from all walks of life. As of the start of the 21 century, rates of abuse continue to rise. According to the National Institute on Drug Abuse, in 2012, an estimated 2.1 million Americans struggled with substance abuse disorders involving painkiller drugs.

Whether taken to treat chronic, pain-related conditions or used for recreational purposes, the adverse effects of painkillers will develop with long-term use. As pain treatments, painkillers work well at the outset producing the intended effects. Over time, drug effects weaken, driving users to increase dosage amounts to produce the desired effects.

Likewise, recreational users experience intense feelings of euphoria and calm when first starting out. With ongoing use, the drug “high” weakens, at which point users increase the dosage amount much like the person who takes the drug for treatment purposes. These effects set the abuse cycle in motion causing users to increase dosage levels on a repeated basis as the body grows more tolerant of the drug’s effects.

Heroin use trends have spiked over the course of the last decade, with rates of increase affecting groups that carried relatively low usage rates in the past. Between the years 2006 and 2013, rates of first time heroin use nearly doubled from 90,000 in 2006 to 169,000 in 2013, according to the U.S. Substance Abuse and Mental Health Services Administration.

During the 1980s and 90s, the majority of heroin users were minorities living in the inner cities, with no health insurance and low income levels. Today’s new heroin users fall on the opposite end of the spectrum: Caucasian, residing in suburban and rural areas with health insurance and higher income levels. In effect, the rise in heroin use stems from groups who otherwise wouldn’t go near the drug 30 years ago.

While differences in socioeconomic level did play a part in keeping past rates of heroin use low, the defining variable for today’s heroin usage rates has more to do with health insurance coverage than anything else. Someone who carries health insurance and has an injury or suffers from chronic pain will likely be prescribed painkillers as a treatment.

With painkiller medications being the “go-to” treatment for anything pain-related, people with health insurance coverage have an increased exposure to these drugs, which work in much the same way as heroin does. Those who become dependent on painkillers eventually reach a point where the body requires a stronger opiate to compensate for rising tolerance levels. Consequently, going from painkillers to heroin becomes a seamless transition.

The Relationship Between Heroin and Prescription Painkillers

Heroin and prescription painkillers work on the same cell receptor sites, producing the same effects in varying degrees. Both types of drugs produce:

The tolerance level effects in particular act as a common denominator regardless of the potency level of any one drug, even with weaker painkiller drugs like codeine. In essence, prescription painkillers are merely legal forms of heroin. While the overprescribing of painkillers may not be the sole cause for increases in heroin use, overprescribing practices most certainly set the ball in motion.

According to John Hopkins Bloomberg School of Public Health, a lack of physician awareness on the addictive potential inherent in painkillers accounts for ongoing overprescribing practices. Studies conducted by John Hopkins show 64 to 97 percent of physicians believe ingesting painkillers in pill form does not produce the same type of addictive effects as snorting or injection routes do. A good majority of physicians also believed painkillers formulated with abuse-deterrent mechanisms carry low addiction potentials, when in fact they’re just as addictive as any other form of opiate.

As painkiller abuse rates soared over the last 10 years, regulatory controls have become stricter, limiting access to these drugs. During this same time period, the heroin market expanded its network, improved its product and dropped product prices.

Heroin distribution networks now reach into the suburbs and rural areas as well as the inner cities. Product purity has improved considerably, which makes it possible to snort heroin as opposed to injecting. Reductions in prices have made heroin considerably cheaper in cost than prescription painkillers.

These factors combined make it that much easier for people to experiment with the drug. As one of the strongest opiates in existence, it only takes so many “tries” before the cycle of abuse and addiction takes hold.