By now, most people know heroin as one of the most addictive drugs on the market. Heroin is derived from opium and belongs to the same class of drugs as prescription pain medications. It’s ability to “mute” the body’s central nervous system is at least comparable to a few of the strongest pain meds, such as morphine and fentanyl.

Heroin has a cumulative effect on the body, weakening the brain’s functional capacity over time. Heroin abuse practices only work to amplify the harmful effects of this drug. In the case of first-users, these harmful effects can take hold all at once making for a dangerous game of Russian roulette for regular and first-time users alike.

As a group, opium based drugs not only produce pain-relieving effects, but also more than a few unintended side effects. Likewise, heroin stimulates the body’s natural pain relieving chemicals while also inducing feelings of calm, contentment and euphoria. These unintended effects drive heroin abuse practices.

According to the Journal of Addiction Science & Clinical Practice, heroin’s powerful effects essentially overpower the brain’s chemical system to the point where the risks that come with heroin abuse can start to surface within a fairly short period of time. 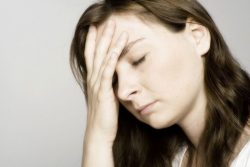 Heroin dependence is characterized by withdrawal symptoms such as fatigue.

Heroin works by forcing the release of dopamine, serotonin and norepinephrine chemicals in the brain. An increase in these chemicals not only produces the expected “high” effect, but also damages the cells that produce and secrete these chemicals.

Over time, heroin abuse effects weaken cell secretion processes to the point where the brain comes to rely on the drug to produce needed neurotransmitter supplies, otherwise known as physical dependence. In the absence of needed heroin amounts, a person will experience uncomfortable withdrawal effects in the form of:

Once physical dependence takes hold, it doesn’t take very long at all before heroin addiction develops. With continued heroin abuse, the drug’s effects eventually start to warp the areas of the brain that regulate reasoning, emotions and decision-making. The overall effect works to change a person’s mindset in terms of what motivates and drives his or her behaviors. These changes account for the compulsive-drug using behaviors that gradually take over a person’s life as heroin abuse morphs into heroin addiction.

How do you Know you are using too Much Heroin?

The Dangers of First-Time Use

According to the National Institute on Drug Abuse, an estimated 23 percent of people who try heroin will become addicted to the drug. In effect, this drug’s powerful effects can reconfigure the brain’s chemical system as of the first time using it. Under these conditions, the processes that drive physical dependence and addiction progress at a much faster rate.

Ideally, not trying heroin offers the best protection against the risks that come with heroin abuse. Otherwise, anyone who finds themselves caught up in a heroin abuse cycle may want to consider getting needed treatment help while they still have the power of mind to do so.

If you suspect you or someone you know may be struggling with a heroin abuse problem and need help finding treatment that meets your needs, please feel free to call our toll-free helpline at 800-405-7172 to speak with one of our addictions specialists.