Opium is a powerful and highly addictive substance that derives from the poppy plant. Opium has been used for centuries for its medicinal properties such as sedation and its ability to alleviate pain. Opium contains morphine and codeine which are both common drugs that are used in the medical field and that are used to make other drugs, such as prescription painkillers and cough syrups.

However, because of the euphoric and sedative effects opium drugs produce in people, throughout the years these drugs have become a problem in society since many people abuse them and become addicted to them.

According to Harvard Health Publications, aside from alcohol, opiates are humanity’s most wide spread, oldest, and most persistent drug problem. Even though psychiatry, law enforcement, and pharmacological science have been seeking solutions for over a century, there are still more than one million opiate addicts in America. However, in more recent years new drug treatments and social therapies are offering some hope of relief. 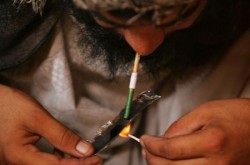 Smoking opium can quickly lead to addiction, a condition where an individual is constantly seeking out their next opium high.

One common way that people abuse opium drugs is by smoking them. This is most commonly seen with heroin. When a person smokes opium they will receive a quicker high from the drug, but this leads to many people forming rapid dependencies and addictions to the drug. Addiction to opium drugs in the number one addiction that people seek out help for, which is mostly due to the intense withdrawal symptoms many people experience once they stop using the drug.

When a person smokes opium they are at higher risk for lung diseases, such as cancer, and they put their body at a higher risk for respiratory failure from overdosing. If a person smokes too much opium they can have an overdose which can lead to breathing problems or it can cause them to blackout and go into a coma; overdosing on opium is also fatal if help is not received in time.

Addiction is the most dangerous consequence from smoking opium because it is a continuing disease that requires treatment and dedication for a person to heal from.

According to Harvard Health Publications, addicts of opiates will continue to use opiates despite the harmful consequences of the drug and they will take more of the drug than they intend, repeatedly try to cut down or stop, and spend much time obtaining the drug and recovering from its effects. Some people cannot keep a job and will turn to crime to pay for their drug addiction.

Opium addiction will take control of a person’s life and it will negatively affect their behavior, their physical health and their mental health until they receive the help they need.